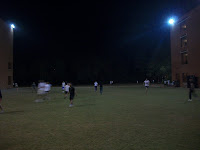 Ultimate Frisbee (wiki page), known as Ultimate, is a non-contact, fast-paced field sport played by two teams. The aim is to throw a frisbee (plastic disc) across the field from teammate to teammate, until it is caught in the opponents' end zone (or goal).

This game is very special for me :), for its special at IIM Ahmedabad (it is considered the traditional game here and it is !!) Our team "Flying Dutchmen" play regularly (yeah !! even PGP1s get enough time to play at IIM A) from 11 pm until the number of players reduces below 8. Louis Khan Plaza or LKP is the grass ground of IIM A. It looks decorated only during festive occasions, the convocation and when a game is on !!!

yeah... its the Ultimate game.. its the one and only Frisbee...

wer they come from